This week, during our expansion, I wanted to feature some of our great music instructors at Silversound Guitar. These are the people that help make this place so great and we wouldn’t be where we are today if it were not for them. I will save my personal story for another time. In this series I wanted to feature what made each of these musicians unique and what they bring to their music lessons.  This week I sat down with our drum instructor Ryan Ross and with Manitou Springs native Brendan Hannigan. 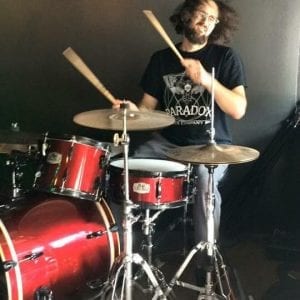 Ryan Ross grew up in the Black Forest part of Colorado Springs, Ryan started playing music at an early age took to drumming. He told me there wasn’t too much to do in those days that far northeast of Colorado Springs. Consequently, it was easy to plow into the drum kit and learn as much as possible.

Jon Gillin: What got you into music?

Ryan Ross: My dad was a drummer and had a great love for music. I remember  he showed me Moving Pictures by Rush (1981). You know it opens with that synth and big crash before it settles into that groove (plays air drums to demonstrate the groove)!

RR: HAHA! Exactly! But that fill just before the pre-chorus of Tom Sawyer had me hooked. My dad bought me my first electronic kit at about 10. I practiced a ton but from 10-18, but I was self taught.

JG: Interesting. So, then you started taking drum lessons?

RR: Yeah. For me it Connected the dots. I had all these things I had copied just by listening, but had nothing to attach it to. One of the big things lessons gave me a was a musical vocabulary. I had just listened and copied techniques, so drum lessons gave me the ability to expand on those in new and interesting ways.  It made my overall playing just 10 times better. I would be so much better if I had started lessons at 10!

JG: Right?! I mean the younger we can start the better, right?

JG: Would you say it was helpful to have an outside set of ears?

RR: Absolutely, objective criticism was super helpful to eliminate bad habits and clean up my technique.

JG: What would you say you like about teaching drum kit

RR: The look of accomplishment on their face when they realize what they can accomplish. It’s great to see my students discovering new sounds and on drums, and they realize there are some many possibilities. There is an excitement in helping someone on their own music journey.

Brendan Hannigan is a multi-instrumentalist who teaches, guitar, bass, piano and voice at Silversound guitar. Brendan has played a lot of different instruments and has recorded a wide variety of styles including blues, jazz, classical avant garde and pop.  A fantastic musician, I got to know him while we were both studying music together at the University of Colorado Colorado Springs, but I wanted to learn more about his musical roots.

Jon Gillin: What was your first musical experience that remember:

Brendan Hannigan: I remember sitting in my parents living room, during Christmas, listening to a Concord Jazz Christmas (just a really great christmas album) and Danger Zone by Kenny Loggins, in one of those old  5 cd carousels, over and over again. Because nothing says Christmas like Danger Zone.

JG:When did you start playing music:

BH: I started playing “seriously” when I picked up the trumpet in 3rd grade. What’s funny is I picked it because it seemed like the right size. That was all it took. I super serious about trumpet until I realized that it wasn’t helping me get girls. There was this guy at the Colorado Springs Conservatory who played guitar and I thought that was just the coolest thing…

JG: What where some guitar players that inspired you:

BH: Initially Jimi Hendrix, Eric Clapton and Stevie Ray Vaughan. I would come home everyday from school and the first thing I would do is watch SRV live at the El Mocambo. I’m pretty sure I wore out that tape.

BH: Basically I would just listen to the recordings and rewind until I learned a lick. I started taking classical lessons with Dale Miller about 2-3 years into playing and filled in a lot of gaps. I took jazz lessons from different people: Alan Joseph, Barry Wedgel, Ricky Sweum. Lessons became a way to organize my thought process. They were invaluable for me to understand what I was playing.

JG: Do you bring that same approach to your teaching?

BH: I try to present things brick by brick so that everything makes sense or is in context. I think back to when I was 17 and what was confusing and mystifying to me about music and I try to address that.

JG: I really like that idea of building something, “brick by brick” as you say.

BH: Yeah! you know, if you build from the ground up it just makes sense and helps fill in a lot of the holes.

It was great to get a sense of what makes our teachers tick and what got them into music. What are the things that keep you motivated? What are the players you look up to? These are things that help you seek out new music, make the most of your lessons and keep improving. 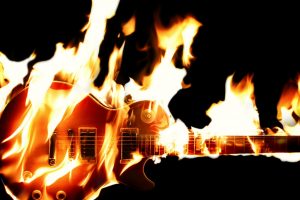 The Washington Post recently published an article on the slow[...] 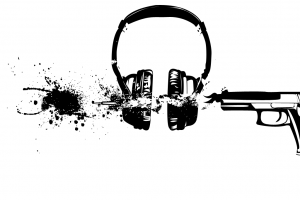 The Music Business is Dead: Long Live the Music

The Old Industry was a Parasite The music business isn’t[...] 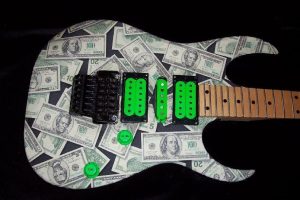 Buying a guitar can be a tricky thing. I grew[...]